Al-Aimmah Bridge on the Tigris River: Hope for Baghdad and its people

The Iraqi Social Forum and the Save the Tigris Campaign participated in the “ I Have Hope”festival on the Al-Aimmah Bridge, Baghdad, May 2016 .

Al-Aimmah Bridge is located on the Tigris river in Baghdad, bridging the two districts of Adhamiya (Sunni-majority) and Kadhimya (Shia majority). On 31 August 2005 the bridge witnessed a deadly incident when hundreds of pilgrims were crushed and fell into the river when rumours about a possible bomb attack were spread. Uthman, a 19 year-old Sunni boy jumped into the river and rescued Shia pilgrim, hereby losing his life. Uthman became a symbol of unity for all Iraqis. Soutna Foundation in collaboration with other NGOs including the Iraqi Social Forum celebrated the annual anniversary of this tragedy by the bridge at the “I Have Hope” Festival.

The festival title “I have hope” sends a message of peace and hope to the two city districts connected by the bridge as well as to other parts of Iraq, between peoples who are brothers and share the same faith. The Iraqi Social Forum participated in the activities of the festival, carrying a message of peace, with the aim of creating a bond between Iraqis.The festival included art shows, memorials, messages of peace and love. The Iraqi Social Forum gave out leaflets and organized activities within in the framework of the Save the Tigris and Iraqi Marshes Campaign, in order to increase awareness of the issues that the Tigris River is facing today. A “leave your fingerprint’ activity was organized in which a large number of people participated. The Iraqi provinces through which the Tigris River flows represent the diversity of Iraq. The provinces are intertwined with each other and the people in the Tigris River basin share its waters. The geography of the Tigris River connects the country from North to South.

People from the districts of Kadhimya and Adhamiya were given the opportunity to interact with each other on the bridge. Uthman’s father was present, and candles were lit on both sides of the bridge in order to remember those who died in the tragedy of Al-Aimmah Bridge. As the festival ended by the sound of fireworks, a public statement was held in which the bonds between the Iraqi people were expressed and a message for peaceful coexistence was delivered. 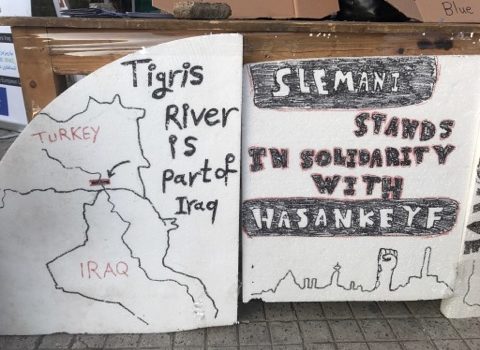 The Unity of WaterSave the Tigris

Press release by the Initiative to Keep Hasankeyf Alive 21 August 2017   With the demolition of human formed rocks through explosives in Hasankeyf, the destruction of this…