How to Prevent Climate Change From Causing Basra to Drown?

The lower part of the Mesopotamian basin, Basra in particular, is one of the regions affected by the rising sea levels. This comes due to its low lying plains which give it its unique marine and river ecosystems distinguishing it from other areas in the south. It is also home to many water bodies, including marshes, rivers, and canals.

Basra and adjacent terrains are located in the far Southeast in the lowest elevation of Iraq. Land gradually descends from the banks of Shatt al-Arab in the north, centre, and east in the Governorate of Basra towards the coast. Water bodies surround most settlements in the area. The southern coastal part stretches between the entrance of Shatt al-Arab and the entrance of Khor al-Zubair and is 50 cm above sea level. The area is therefore at risk of drowning due to sea-level rise caused by climate change.

Projected sea-level rise simulations and their impact on rural and urban settlements in Basra showed that a 30 cm sea level rise, which is the expected projection by the end of the current century, threatens to submerge the lands adjacent to Shatt al-Arab (Siba) as well as the lowlands in the Iraqi coast in Khor Abdullah and lands adjacent to Basra Marshes (the eastern Hammar Marshes). 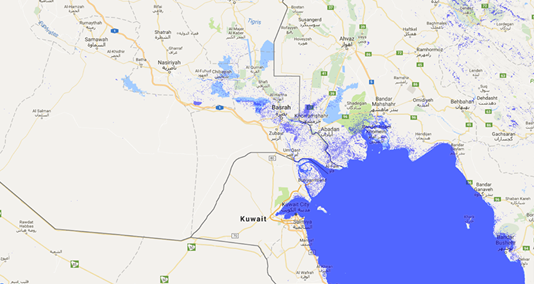 If sea levels rise by 50 cm, a projection made by other less accepted scientific studies, sea water will submerge, as well as the above-mentioned areas, the extreme coastal area of Ras El-Bisha, some of the lands adjacent to Shatt al-Arab near Siba, the marshes’ edges, and the villages near Garmat Ali River.

Should sea levels rise by a meter, which is an unlikely projection unless melting of the ice caps in the Arctic reaches unexpected high levels, more lands will join the list made by the two previous projections: Most of the eastern part of the Iraqi coast surrounding Ras Al-Bisha, most of Bubiyan Island facing the Iraqi coast, and the river banks of the middle and southern parts of Shatt al-Arab watercourse. The rise will also affect the lands surrounding Hammar Marshes to the east.

Communities in southern Iraq have, since the dawn of time, adapted to water abundance in their environment, whether in terms of their handicrafts, or the natural building materials they used inside the water bodies; i.e. in the making of what is commonly called ‘Jibasha,’  which are floating human settlements inside the swamps in the deep marshes. Jibasha have become a hallmark of settlements inside the marshes in Maysan, Dhi Qar, and Basra Governorates. Some geological experts highlight that the Mesopotamian basin witnessed marine transgression and regression over the last 14.000 years, with sea level stabilizing during the fifth and third centuries BC.

The lowlands facing the danger of being submerged if the sea level rises by more than a meter include the rural areas and villages overlooking Shatt al-Arab and the marshes. Should this happen, it would result in major displacement to the cities from the villages, threatening social and urban fabrics. Demographics and settlement complications can emerge and disturb social stability and urban planning if large numbers of people migrate from their places of residence towards the north. A similar situation already happened in the 1990s following the major displacement movement triggered by draining the marshes. The displacement then caused social economic and cultural problems in addition to the disturbance created in urban and population planning inside the cities.

Sea level rise decreases food self-sufficiency provided by the farms situated on the highly fertile river banks in Basra and the marshes. Following the flood of Shatt al-Arab in the spring of 2019, key farms were damaged and their crops destroyed in Siba District south of Basra. On top of that, high-salinity surface waters flooded the farms near the rivers. However, most impacted would be urban and housing projects in the affected areas given the damage to infrastructure and sewage systems.

According to the UN Intergovernmental Panel on Climate Change (IPCC) report, the average sea level rose by 20 cm in the twentieth century and is expected to reach 30 cm by the end of the twenty-first century. In addition, the rates of ice loss from the Greenland and Antarctica ice sheets have accelerated in the last two decades.

Another cause of global warming is the El Nino phenomenon, which stabilizes the air systems in the northern hemisphere, leading to an increase in temperatures in different parts of the world.

The projections of future sea-level rise and the threats it poses to the most southern part of Iraq require creating sustainable nature-based solutions on the one hand, as well as solutions that adopt modern technology on the other. They also require preparing communities to adapt to the changes and educating them about what is to come in the future in order to engage them in creating the solutions. The solutions can be summed up in the following:

This is a slightly shortened version of the Arabic article published in Al Mada. 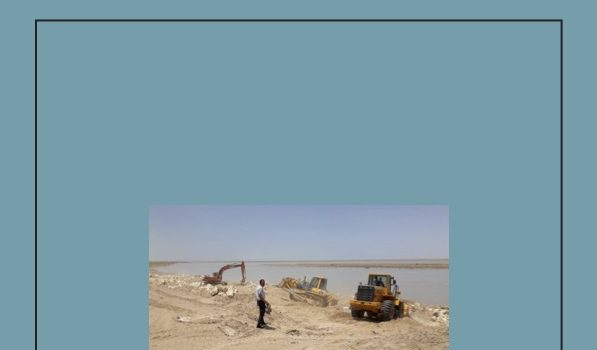 Save the Tigris Launches New Report on Makhoul DamUncategorized