This article was originally published by The National on 25 May 2021. The original can be found here.

By Sinan Mahmoud and Robert Tollast

Millions of Iraqis face an intolerably harsh summer, with Turkish dams on the Tigris and Euphrates rivers compounding a year of low rainfall.

The rivers, which account for more than 90 per cent of Iraq’s freshwater, were at historically low levels following scant winter rainfall in the region and snowmelt mainly in the mountains of Southern Turkey, which feeds into the rivers.

Turkey says it is also facing a drought and dwindling water supplies but stands accused of holding on to supplies in its dam reservoirs.

On 7 May, Syrian Minister of Water Resources Tamam Raad called on Turkey to release more water from the vast Ataturk Dam.

On 21 May, Iraq’s Ministry of Water Resources said Turkey had released some water but emphasised that the situation was a crisis.

In the capital Baghdad, photos of the Tigris showed an almost non-existent river.

“Is there a crisis? Yes, there is a real crisis,” Minister of Water Resources, Mahdi Rasheed Al Hamdani, told a press conference this month.

One reason for that decline was a network of 22 Turkish dams that scaled up with the completion of the Ataturk Dam on the Euphrates in 1990 and the recently completed Ilisu Dam on the Tigris. Climate change has also worsened the crisis.

As summer approaches, upstream dams in Iran have also shrunk the Tigris tributaries, cutting off flow at the Diyala river and decreasing the flow of the Lower Zaab river by 70 per cent, causing a “big crisis” in Diyala province, Mr. Al Hamdani added.

“For sure, the situation is worrying,” Mr. Al Hamdani said.

Experts and officials told The National that the effect of this plunge in water levels could destroy the ecology, worsen household water quality, which in most areas is already unsafe to drink, and increase soil salinity, leaving barren land that was once fertile.

Agricultural progress after bumper harvests in 2019 “can be easily undone this summer,” said Mr Zwijenburg, a UN Green Star winner.

In Diyala, northeast of Baghdad, farmers are counting their losses.

The man-made Lake Hamrin, Diyala’s main water source, has lost nearly 70 per cent of its water, according Ahmed Al Zarkoshi, the mayor of Al Saadiyah district.

Over the past three weeks, the lack of water has forced some of the province’s 400 water projects to stop for a few days or work less than their capacity, said the spokesman of the provincial Water Resources Department, Emad Salih.

“The current situation is miserable,” Mr Thamir, a 50-year-old farmer, told The National.

To cope with the shortage of water, the Agriculture Ministry has prevented planting rice, corn and vegetables in the summer, allowing only water to reach orchards of palm trees and fruit.

“There is no water for our lands, our livestock and for us to drink,” he said, adding that the residents buy potable water in tankers or jerrycans.

“Those who can afford digging wells will stay in their lands to feed their cattle and make a living from them, but those who can’t will definitely leave for the cities to seek jobs such as construction workers,” he added.

For years, Iraq has been struggling to reach agreements with Turkey and Iran that allow a fair volume of water, but implementation has proven elusive.

Mismanagement of water resources in Iraq, including inefficient flood irrigation methods, rundown water pipe infrastructure and the growing of water-intensive crops such as rice, compound the problem.

As Iraq failed to address these problems over years of sanctions and war, the combined reservoir storage capacity of upriver dams has grown.

In Turkey, storage capacity could be as high as 94 billion cubic metres of water, more than the combined annual flow of the Tigris and Euphrates.

But on all of the dams on the Tigris and Euphrates, evaporation rates are getting higher as global temperatures rise. Low rainfall could complicate efforts to reach agreements.

“I believe that there will be a big problem this summer even worse than what we saw in 2009, 2015 and 2018,” said Jassim Al Assadi, the managing director of Nature Iraq NGO.

Saddam later drained them and displaced the inhabitants.

But after being revived after 2003, the fragile ecosystem almost disappeared in 2015 after prolonged drought.

As their buffalos become sick, many choose to move to the city despite the risk of unemployment, putting even more pressure on strained government services.

“We have to set off the alarm now to prepare ourselves. We act when everything has perished,” Mr Al Asadi said.

In 2018, over 100,000 people fell sick in the southern port city of Basra by poor domestic water supplies, leading to widespread protests.

Apart from oil pollution uncovered by Human Rights Watch, one of the causes of the mass poisoning was high water salinity, HRW said. The Shatt Al Arab, where the Tigris and Euphrates meet before entering the Gulf, was at a low ebb.

That led to high tides from the Gulf pushing seawater far inland.

Power stations and water treatment plants that take water from the Shatt Al Arab, already struggling due to lack of maintenance, were not designed to cope with high salinity. Meanwhile, farmland became infertile.

That could lead to more power plant failures through central Iraq, Mr Istepanian said. Living conditions in Basra and other cities would worsen as summer temperatures surpass 50 Celsius.

Public health in Basra could be again impacted as water levels drop because of local environmental mismanagement including the dumping of sewage and oil spills, Mr Zwijnenburg said. Water pollution would become more concentrated.

“We will now see if that work is paying off.”

But even if such projects manage to stablise Basra’s situation this year, the long term trends are worrying for the rest of the country, Mr Zwijnenburg said. 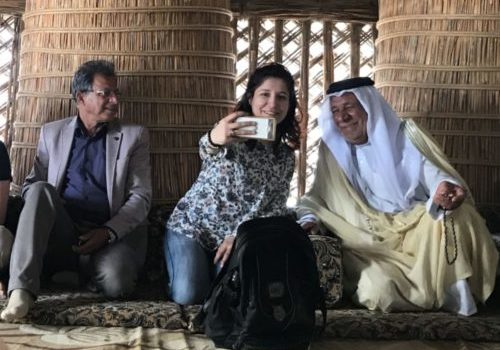 Mystery Over Thousands of Dead Carp in Euphrates River

The New Arab, 3 November 2018 Iraqi fish farmers south of Baghdad have been left reeling after finding thousands of dead carp mysteriously floating in their cages or…