Law Enforcement in the Iraqi Marshes: How Local Campaigners Are Working to Protect the Marshlands’ Biodiversity

The Central Marshes of Chibayish, located in Dhi Qar Governorate, Southern Iraq, suffer from great neglect at all levels despite being a World Heritage Site. Successive Iraq governments have not invested sufficiently in the protection of this natural heritage property. The Marshes continue to face a myriad of threats, despite the existence of adequate local laws to protect the site and ensure its development and sustainability. If relevant legislation were to be correctly applied on the ground, it would contribute to protection of biodiversity, decrease in pollution and ensure adequate levels of water supplies for the marshlands. In addition such legislation could encourage Iraqi authorities to develop plans, studies, and conduct research in order to protect the Marshes and ensure the protection of its biodiversity.

To this aim, activists in Nasiriyah of Humat Dijlah (Tigris Protectors) in the first half of 2021 have ran a campaign to call for enforcement of Articles 7-14-18 of the Environmental Protection and Enhancement Law No. 27 of 2009. Article 7 of the Environmental Protection and Enhancement Law of Iraq would guarantee the formation of a Council for the Protection and Enhancement of the Environment in Dhi Qar Governorate, but this has not taken place yet. This council would work to implement Articles 14 and 18 of the Law, which guarantee the protection of the marsh environment and its biodiversity from water pollution (article 14) and overhunting and overfishing (article 18). These articles also detail the importance of protecting the marsh environment. Law 27/2009 was passed by Iraq’s Council of Representatives in 2009 but was never properly implemented.

The campaign gagthered more than 30 young people form Nasiriyah and Chibayish in trainings and workshops to discuss this legislatoin, and raised awareness about the law on social media platforms. Local authorities and community representatives, activists were involved in this environmental campaign. Representatives of local tribes explained how increased salinity has reached alarming levels in the Marshes and how wildlife has been effected by excessive hunting practices. Jassim Al-Asadi, representing Nature Iraq in Chibayish, stressed how valuable Law 27/2009 would be for the protection of biodiversity in the Marshes. “Environmental police was founded in the Marshes area, but due to lack of support they are not operating” Al-Asadi claimed.

A seminar organized in Chibayish gathered local community representatives, activsits and local authorities, including the mayor of the city, to discuss a policy paper on Iraq’s environmental legislation and a review of Law 27/2009. This resulted in positive feedback and a promise of more support to pressure local authorities in Dhi Qar to enforce Law 27/2009. Kefah Al-Asadi, mayor of Chibayish, pledged to offer all of his support to implement the legislation. The Agriculture Directorate of Chibayish on the other hand emphasized that some governmental institutions have been polluting the water resources on the Marshes. This issue should be solved in order to better enforce Law 27/2009.

Meanwhile the campaign continues to advocate for formation of the Council for the Protection and Enhancement of the Environment.

This campaign was implemented by Humat Dijlah in the framework of the project Sumereen: Sumerian Youth for Economic Development and Cultural Heritage in Dhi Qar, a local project under the programme Supporting Recovery and Stability in Iraq Through Local development. Sumereen is funded by the European Union (EU) and implemented by the United Nations Development Programme (UNDP) in partnership with the Governorate of Dhi Qar and Un Ponte Per. 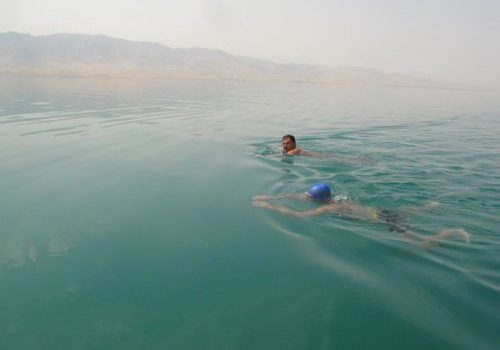 Swimming Expedition calls for Protection of Lake DukanSave the Tigris