In July 2019, Save the Tigris expanded its reach by creating a new group of young activists through a series of trainings offered in different cities throughout Iraq from 19-29 July. The trainings aimed at developing the capacity of new water protector teams and hoped to inspire more environmental advocacy movements. This work is especially urgent now given the problems suffered by Iraq’s rivers, largely due to pollution from unregulated sewage outlets and the careless dumping of harmful substances. There is also the issue of seasonal water scarcity, particularly dire in the summer months.

The trainings were organized in various Iraqi governorates to support a more robust water advocacy and protection movement across the country guided by informed and knowledgeable environmental activists. Each two-day training program focused on developing management skills related to building and running effective, results-based campaigns. Participants reviewed all the stages of an integrated campaign, and learned how to implement them in their respective cities. The trainings aimed to provide participants with an ability to assess and overcome challenges as they arise, and the insight needed to analyze a campaign’s progress accurately, logically prioritizing issues and concerns. To this end, the trainees practiced SMART (Smart Planning) tools and ancillary exercises during the training.

The problems of water scarcity, overfishing in Hor al-Dalmaj and the mismanagement of water resources in Al-Bedair district were high on the list of the joint training sessions which brought together the Najaf Social Forum, the Babilia Social Forum and the Diwaniya Environment and Peace Forum. These three groups met in the Writers Union Hall in Najaf to consider these pressing issues. At the end of their time together, participants visited the Najaf Sea, giving them first-hand experience of the reality of environmental concerns in the region. Maysan, Dhi Qar and Tikrit held similar trainings in their local forums; attendees discussed the most critical problems facing the rivers, with a focus on the high levels of pollution from the discharge of heavy water and wastewater directly into rivers, as well as crude oil leaking from old pipes extending under water bodies in the marsh areas. Liquid waste was not the only issue raised, the rivers also suffer from the dumping of plastic and other solids. Activists in the Tikrit Social Forum decided to form a masar (path) dedicated to the protection of water, and participants in Nasiriyah established a special water forum to address the effects of pollution and water levels and quality in the city. Together environmental activists and decision-makers came up with recommendations to tackle the environmental issues that impact Dhi Qar province. 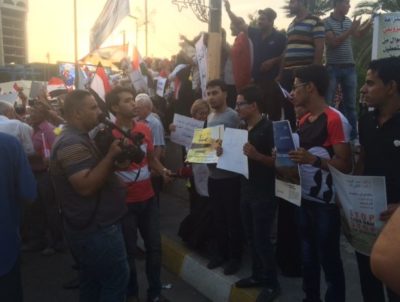 Call to “2nd Global Action Day” for Hasankeyf on 23rd September 2017!Save the Tigris

Countdown to Mesopotamian Water Forum 2019: What Are the Threats to Water Quality and River Health in the Tigris-Euphrates Basin?