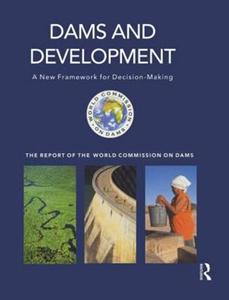 Some see in our [water] scarcity a harbinger of troubled waters to come. They believe water scarcity inevitably locks peoples, regions and nations in a fierce, competitive struggle in which restless millions race to the bottom in fear and self-interest. And thus, they maintain, when rivers cross borders within or between nations, water scarcity leads to water stress that leads to water wars. We see water as an instrument, a catalyst for peace, that brings us together, neither to build dams nor tear them down but to carefully develop resources for the long term.

This century we have collectively bought, on average, one large dam per day, and there have been precious few, if any, comprehensive, independent analyses as to why dams came about, how dams perform over time, and whether we are getting a fair return from our $2 trillion investment.

Most recently governments, industry and aid agencies have been challenged around the world for deciding the destiny of millions without including the poor, or even popular majorities of countries they believe to be helping. To confer legitimacy on such epochal decisions, real development must be people-centered, while respecting the role of the state as mediating, and often representing, their interests.

Our mandate involves the most precious element on earth, and that, of course, involves power: who wields it, how to share it, which ways the state may better balance it.

Imagine a typical dam:  perhaps you see a smooth, parabolic, concrete structure. It seems to generate cheap electricity through turbines at its base. Engineers worship it, ecologists curse it, indigenous tribes lose their culture to it. Native fisheries plunge after construction, but floods decline as well. It pollutes neither air nor water, provides water for nearby towns, turns arid soils into rich farmland. People and animals were relocated, but the economic returns made doing so cost-effective. The dam embodies ambitions of statesmen, but when politicians approach with their ambitious plans, apprehensive peoples hold signs that say ‘Save our beloved river’.

THERE ARE BENEFITS; THERE ARE COSTS NOT ACCOUNTED FOR, AND LACK OF EQUITY IN THE DISTRIBUTION OF BOTH

We believe there can no longer be any justifiable doubt about the following:

■ Dams have made an important and significant contribution to human development, and the benefits derived from them have been considerable.

■ In too many cases an unacceptable and often unnecessary price has been paid to secure those benefits, especially in social and environmental terms, by people displaced, by communities downstream, by taxpayers and by the natural environment.

■ Lack of equity in the distribution of benefits has called into question the value of many dams in meeting water and energy development needs when compared with the alternatives.

■ By bringing to the table all those whose rights are involved and who bear the risks associated with different options for water and energy resources development, the conditions for a positive resolution of competing interests and conflicts are created.

■ Negotiating outcomes will greatly improve the development effectiveness of water and energy projects by eliminating unfavourable projects at an early stage, and by offering as a choice only those options that key stakeholders agree represent the best ones to meet the needs in question.

The direction we must take is clear. It is to break through the traditional boundaries of thinking and look at these issues from a different perspective. Our recommendations develop a rationale and framework that responds to this critical need and offers scope for progress that no single perspective can offer on its own. It will ensure that decision-making on water and energy development:

■ reflects a comprehensive approach to integrating social, environmental and economic dimensions of development;

■ creates greater levels of transparency and certainty for all involved; and

■ increases levels of confidence in the ability of nations and communities to meet their future water and energy needs.

The unfolding scenario for water use in many parts of the world is one of increasing concern about access, equity and the response to growing needs. This affects relations:

■ within and between nations;

■ between rural and urban populations;

■ between upstream and downstream interests;

■ between agricultural, industrial and domestic sectors; and

■ between human needs and the requirements of a healthy environment.

Our challenge is to resolve competing interests collectively.

The challenge is not to mobilise so as to compete successfully, but to co-operate in reconciling competing needs. It is to find ways of sharing water resources equitably and sustainably – ways that meet the needs of all people as well as those of the environment and economic development.

THE POOR, THE VULNERABLE, FUTURE GENERATIONS

Perhaps of most significance is the fact that social groups bearing the social and environmental costs and risks of large dams, especially the poor, vulnerable and future generations, are often not the same groups that receive the water and electricity services, nor the social and economic benefits from these. Applying a ‘balance-sheet’ approach to assess the costs and benefits of large dams, where large inequities exist in the distribution of these costs and benefits, is seen as unacceptable given existing commitments to human rights and sustainable development.

AFFECTED PEOPLE NOT IDENTIFIED, NOT EMPOWERED

The World Commission on Dams Global Review documents a frequent failure to recognise affected people and empower them to participate in the process. In some cases, the opportunity for corruption provided by dams as large-scale infrastructure projects further distorted decision-making.

Improving development outcomes in the future requires a substantially expanded basis for deciding on proposed water and energy development projects – a basis that reflects a full knowledge and understanding of the benefits, impacts and risks of large dam projects to all parties. It also requires introducing new voices, perspectives and criteria into decision-making, as well as processes that will build consensus around the decisions reached.  The Commission grouped the core values that informed its understanding of these issues under five principal headings:

The framework, within which the dams debate clearly resides, builds upon international recognition of human rights, the right to development and the right to a healthy environment.

We believe that the World Commission on Dams report is a milestone in the evolution of dams as a development option. We have:

■ conducted the first comprehensive global and independent review of the performance of essential aspects of dams and their contribution to development. We have done this through an inclusive process that has brought all significant players into the debate;

■ shifted the centre of gravity in the dams debate to one focused on investing in options assessment, evaluating opportunities to improve performance and address legacies of existing dams, and achieving an equitable sharing of benefits in sustainable water resources development; and

■ demonstrated that the future for water and energy resources development lies with participatory decision-making, using a rights-and-risks approach that will raise the importance of the social and environmental dimensions of dams to a level once reserved for the economic dimension.

From June 30 – July 10 the 43rd Session of the UNESCO World Heritage Committee (WHC) will take place in Baku, Azerbaijan. The WHC will examine the state…