Neglect May Do What Daesh Didn’t: Breach Iraqi Dam

More than 16 months after Iraqi and Kurdish forces reclaimed Mosul Dam from Daesh fighters, the structure faces a new threat: the danger that it may collapse because of insufficient maintenance, overwhelming major communities downstream with floodwaters.

In the worst-case scenario, according to State Department officials, an estimated 500,000 people could be killed while more than a million could be rendered homeless if the dam, Iraq’s largest, were to collapse in the spring, when the Tigris is swollen by rain and melting snow. The casualty toll and damage would be much less if Iraqi citizens received adequate warning, if the dam collapsed only partially or if it were breached in the summer or fall, when the water level is lower.

President Obama underscored the need to make emergency repairs in a call Wednesday with Prime Minister Haider al-Abadi, in which the two also discussed recent advances by Iraqi security forces against Daesh in Ramadi, in western Iraq, the White House said. Gen. Joseph F. Dunford Jr., the chairman of the Joint Chiefs of Staff, reiterated the urgent need to maintain the dam during a meeting with Mr. Abadi in Baghdad on Thursday, according to a senior Defense Department official.

Worried that repairs might not come in time, American officials have urged the Iraqi government to begin warning its citizens, including those who live under the control of Daesh Mosul, about precautions to take and where to flee if the dam starts to fail.

A State Department official who is part of an interagency team assembled last year to focus on the problem cautioned that spring brings heightened risk. The official said the administration’s assessment was that absent energetic efforts to repair the dam, it would collapse — although he did not predict when.

At the heart of the problem is a major engineering challenge: reinforcing a massive dam built during the Saddam Hussein era on a weak foundation of gypsum, chalky limestone and clay.

But the problem is political, as well. The growing risks described by American officials come as Mr. Abadi contends with budget shortages, the ongoing conflict with Daesh fighters and challenges to his authority from hard-line Shiite politicians prone to see American proposals as a conspiracy to expand Western influence in Iraq.

An Italian company, the Trevi Group, has been negotiating with the Iraqi government to make emergency repairs to the dam, at an estimated cost of more than $380 million, according to Iraqi officials.

Prime Minister Matteo Renzi of Italy said in December that he would deploy 450 Italian troops at the dam to safeguard company workers if they began operations there. But negotiations, including on security arrangements, have yet to be completed.

Lukman Faily, Iraq’s ambassador to the United States, said on Sunday that the Iraqi government understood the risk to the dam and would meet with the Italian company this week to continue the negotiations.

As for security for any Italian engineers sent to make repairs, the ambassador said on Sunday that “the dam is protected by Iraqi forces, but we have no objection in the provision of additional security expertise from Italy or other coalition nations”.

But reflecting Iraq’s fractured politics, Mohsin al-Shammari, the head of Iraq’s Ministry of Water Resources and a political supporter of the anti-American Shiite cleric Moktada al-Sadr, said last month that Iraq did not need any “foreign support” in guarding the dam.

“There is no need for Italian forces to protect the dam,” Mahdi Rasheed, an adviser to Mr. Shammari, said Sunday in a telephone interview.

Mosul Dam, which was completed in 1984 by a German and Italian consortium and is 30 miles upstream from the city of Mosul, has long been a maintenance nightmare. Before fighters from Daesh swept across northern Iraq in 2014, approximately 600 Iraqis worked at the dam.

Because the water was eating away at the gypsum base under the dam, Iraqi teams drilled holes in that foundation and filled them with a cement grout mixture. That work was carried out three times a day, six days a week.

Daesh controlled the dam for a little more than a week in August 2014, but its fighters did not damage the structure. After it was retaken later that month, however, many of the Iraqi workers never returned and the Iraqi government did not resume regular maintenance. The Iraqis also lost their usual source of grouting material, which was produced by a factory in Mosul, now under the control of the Daesh.

As worries about the dam mounted, the Obama administration formed an interagency team and installed 92 instruments to measure, among other things, the pressure on the dam and the sediment in the water nearby — one way of assessing the rate at which the gypsum base was disintegrating.

The Obama administration ruled out undertaking the costly repair project itself, and the Pentagon has been reluctant to set up a base near the dam to protect the repair efforts.

So the Obama administration has sought to help the Iraqis defray some of the cost by urging the World Bank to agree that $200 million of a $1.2 billion loan for Iraq would be for Mosul Dam repairs. International companies were informed by American officials that they would need to negotiate directly with the Iraqis and make their own security arrangements.

The period of greatest risk is from the end of February to mid-May, when the Tigris is at its highest and the pressure on the dam is the greatest.

The worst-case scenario is a total collapse in the spring for which no public education campaign has been carried out on where citizens should flee or what precautions they should take.

State Department officials said the danger would be the greatest in Mosul, where rushing water would be funneled in a powerful current along the Tigris through the center of the city. Residents might have as little as two hours’ notice that the dam to the north had given way, and the wall of water could be as high as 80 feet.

The water would continue along the Tigris, which runs by Tikrit and Samarra down to Baghdad, potentially knocking out bridges along the way, according to the administration’s analysis. As the water traveled south, debris, pesticides and corpses would become part of the flow, threatening the country’s supply of clean water and its irrigation system.

The Iraqi capital would have several days’ notice before the water reached there. But some areas in Baghdad near the Tigris, including the American Embassy compound and prominent Iraqi government buildings, could be flooded with water as high as 13 feet.

Educating Mosul’s residents about the danger is complicated. Residents could avoid the main rush of water by heeding warnings to move to the outskirts. But the Islamic State, which controls the city, might see such warnings as a gambit to clear the way for an offensive backed by the United States and order citizens to stay.

“Right now, there is no alert system in place,” said the State Department official, who spoke on the condition of anonymity to discuss the internal deliberations with the Iraqis.

Mr. Faily, the Iraqi ambassador, asserted that the Iraqi government was determined to have the dam fixed but was ready for all eventualities. “We have an emergency plan in the event of collapse,” 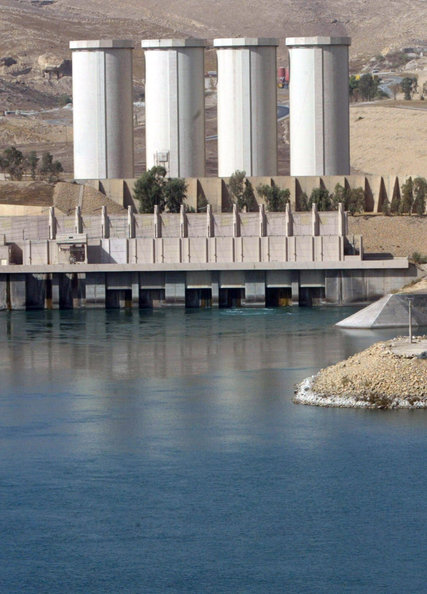 The Perpetual Coma of “COP21”: Climate Change Conference in Paris and Iraqi Civil SocietyStatement of Establishment of the Moroccan Coalition for Climate Justice