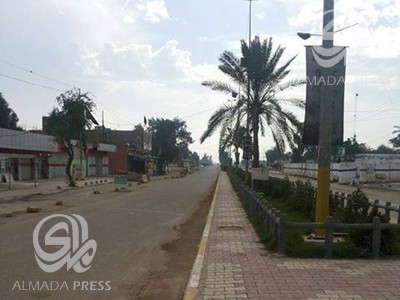 The Board of Diyala province, announced on Sunday that they will be providing funds to hire tankers to transport potable water to the residents of the district of Baladruz since gates of water have been shut off by Daaesh, stressing that Daaesh are fighting in a new “water war” to put control on areas such as these. The board of Diyala province said that the people of Balad Ruz formed a combat regiment composed of more than 400 000 fighter and will be under the command of security leaders for the purpose of attacking and liberate Al-sidoor Dam from the hands of Daaesh. This in addition to liberating Tukal, Nofal, Sensl, Hamps and Aljazeera areas.

The head of the Diyala provincial council, Muthana Al-Tamimi said in an interview with Al-maada Press, during an emergency meeting in the provincial council building to discuss the water shortage in Balad Ruz (50 km east of Diyala) due to the actions of Daaesh. “The meeting came to the decisions of the provision of sums of money to hire tankers to transport clean drinking water to the district, in addition to instruct all the institutions of the province to maintain working throughout the day to transport drinking water to the people of Balad Ruz”.

A member of Balad Ruz district council, Hamid Al-Shaheen said in an interview to Al-Maada Press, “Besides the car bombs and the improvised explosive devices, Daaesh wants to fight a new war in Diyala, a the water war”,” noting that “the purpose of this war is to put control on areas that are not under their  control”, adding that “the district is the most affected by the drought of the Ruz River water for more than eight days”.

A member of the Iraqi Council of Representatives Furat Al-Tamimi said to Almaada Press “We have to launch a military operation to lift the siege on Al-sidoor Dam “, noting that “the poor actions that are being take do not meet the needs and aspiration through water tankering to most of the villages and regions in the district because of what Daaesh had done of the closure of Ruz dam”.

Al-Tamimi pointed out that “there are more than 150 000 families are suffering water shortages in addition to the destruction of more than 35,000 acres of farmland, especially that the district is the first in the production of wheat and barley in the area”.

In turn, Ali Al-Saadi, one of the people of the district appealed to the head of the House of Representatives Salim Al-Joubori, being on of the people of the district, “to lift the siege on the people of Balad Ruz” noting that in “this period there will be a genocide caused by the interruption of water from the area for more than eight days, especially after the closure of the waters port of Al-sidoor Dam by Daaesh gangs where there is no drinking water for thousands of citizens, “adding that “women, children dead because of the water crises in the area”.

Diyala provincial council announced on 4September that a humanitarian disaster would be imminent in the district of Balad Ruz due to the water shortage, while urging to speed up the military operations against Daaesh towards the region of Al-Sidoor.

Governments Must Take Their Commitment to the World Heritage More Seriously